Something new is coming to The Sentry Box: D&D Birthday Parties! Looking for something unique and fun for your child’s birthday? D&D is a great way for them and their friends to come together, bond, and sneakily help them with skills like math, reading, problem solving, working as a team and using their imagination! Oh and did we mention how much fun it is too?
We have a police-checked DM who is experienced with children and running D&D Games for them – check out the Testimonial from Roxley Games owner, Gavan Brown, below.
Contact the store by emailing ops@sentrybox.com if you have questions or are interested in making a booking!

Warlord Games has announced a new fantasy skirmish miniature wargame that they will be releasing soon called Warlords of Erewhon. It is a game warband level game that sites between skirmish games and large scale fantasy games like AoS and 9th Age. The best part is that you can use any miniatures you want and Warlord has already announced that they will expand the game with new warbands

Here are the details that they sent to us.

Warlords of Erehwon transports us to the multifarious fantasy realms of fiction, folklore and myth, placing us at the head of a fighting force of our choosing. Model warbands clash across fantastical tabletops as humans and monsters, the living and the dead, war over the spoils of victory in a universe of heroes, sorcerers and the supernatural.

Our game has been designed with a single objective in mind – to allow us to play fast paced and exciting miniature battles upon a modestly-sized table between rival forces of that we describe as warbands. A warband represents your own band of warriors – courageous humans, blood-thirsty monsters, perhaps even minions that you have raised from beyond the grave to do your bidding.

END_OF_DOCUMENT_TOKEN_TO_BE_REPLACED

We saw a lot of announcements over the course of GEN CON and have curated a few of the ones we’re most excited about here for you.

Fantasy Flight Games had a bunch of announcements during and after GEN CON. Starting with KeyForge: Call of the Archons Starter Set and Archon Decks:

From the imagination of legendary game designer Richard Garfield comes a game unlike anything the world has ever seen—a game where every deck is as unique as the person who wields it and no two battles will ever be the same. This is KeyForge, where deckbuilding and boosters are a thing of the past, where you can carve a path of discovery with every deck, where you can throw yourself into the game with the force of a wild wormhole and embrace the thrill of a tactical battle where wits will win the day!

Along with this new breed of game comes a new world: the Crucible, an artificial world built from the pieces of countless planets across the stars. Here, anything is possible. This world was built for the Archons, god-like beings who, for all their power, know little about their own origins. The Archons clash in constant struggles, leading motley companies of various factions as they seek to find and unlock the planet’s hidden Vaults to gain ultimate knowledge and power.

Every Archon Deck contains a full play experience with a deck that cannot be altered, meaning it’s ready to play right out of the box. Not only does this remove the need for deckbuilding or boosters, it also creates a new form of gameplay with innovative mechanics that challenges you to use every card in your deck to find the strongest and most cunning combinations. It is not the cards themselves that are powerful, but rather the interactions between them—interactions that can only be found in your deck. Your ability to make tough tactical decisions will determine your success as you and your opponent trade blows in clashes that can shift in an instant!

We’re so excited for this game that we are already taking pre-orders for both the Starter Set and additional decks at Sentry Box. Contact the store today to reserve your copy. It is expected to arrive on shelves in the fourth quarter of this year.

END_OF_DOCUMENT_TOKEN_TO_BE_REPLACED

This past week the Spiel de Jahres 2018 winners were announced. Taking top prize of Game of the Year was Azul by designer Michael Kiesling.  A huge congrats to this designer for making one of the most buzzed about games this past year. Come down to Sentry Box to get your own copy of this fantastic game by publisher Next Move.

Winning the Connoisseur-gamer Game of the Year (given to heavier games) was Die Quacksalber von Quedlinburg by designer Wolfgang Warsch, who was responsible for 2 of the 3 nominees in the category this year. Currently only available in the European market, North Star Games has announced that it will be bringing this game to the North American market by the end of this year.

Children’s Game of the Year was won by Funkelschatz (Dragon’s Breath) by designers Lena und Günter Burkhardt and published by Haba,

Congrats to all the winners!

END_OF_DOCUMENT_TOKEN_TO_BE_REPLACED

Another week of newsletters has been shifted through so that you don’t have to. 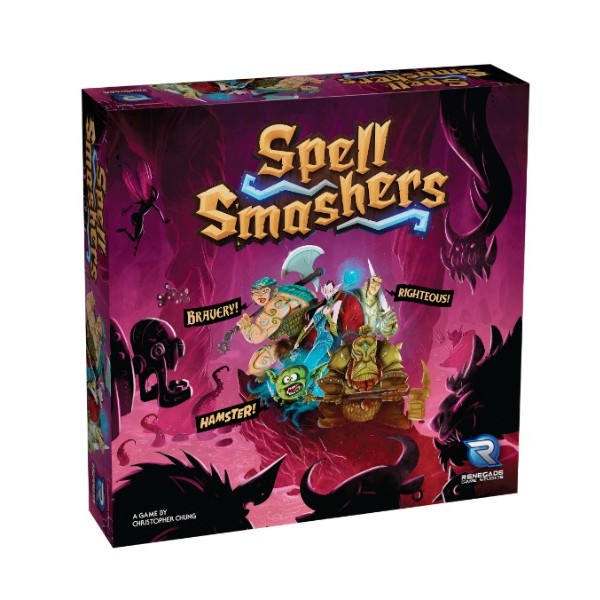 Renegade Game Studios™ is excited to announce a new word- and sword-slinging game — Spell Smashers! This title is designed by Christopher Chung, designer of award-winning Lanterns: The Harvest Festival. It also boasts a notable artist, The Mico, renown for his work on the North Sea Trilogy. The two combined create a product bursting with dynamic visuals and engaging gameplay.
In Spell Smashers, you combine your letter cards to spell words, smashing fearsome monsters and their even more fearsome adjectives!

When you deal damage to a monster, you gain precious coins. When you defeat a monster, you collect that monster as a trophy … and gain a new letter to use later on! But beware — as you battle these dangerous creatures, you receive wounds, which are difficult letter combinations that could ruin your day.

Between battles, visit the local town and spend your hard-earned loot to outfit yourself with powerful gear, take on new quests, buy devious potions, or grab an ale at the tavern as you boast about your battle scars. Set your sights on fame and glory as you smash monsters with your spelling skills and rid the world of evil!

You can find this title on game shelves beginning in October 2018.

END_OF_DOCUMENT_TOKEN_TO_BE_REPLACED

Stampede has come and gone for another year but that doesn’t mean that you can’t keep the yahooing going for the rest of the summer. There are some fantastic western and cowboy themed games that don’t require you to limit your love of all things wild west to one week a year.

Pioneer Days is a newer release that we played on our livestream last month.  In this game you collect goods in your wagons, mine for gold nuggets, raise cattle, recruit townsfolk and work to gain the favours of the towns you travel through to collect points. Played over 4 weeks, at the beginning of each week, you roll a set of dice that you will take turns drafting to trigger various actions over 5 days (turns). At the end of the day, the leftover die goes on the matching  coloured disaster track. When a disaster triggers you have to be prepared with the proper goods or you risk losing your cattle, townsfolk or damaging your wagon.

END_OF_DOCUMENT_TOKEN_TO_BE_REPLACED

It’s summertime and for many of us that means vacations. Whether you’re looking to play games around the campfire, while waiting for a connection at the airport, or with friends or family at your destination, we here at Sentry Box have you covered.

Card games make great travelling games.  They are small, light and better yet, can be bundled together when packing. You can often fit many card games together in one box if you take out the inserts. Sometimes a game that looks big, packs much smaller. For example, the Dominion deck building series has fantastic inserts to help you organize your cards.  But take the cards out, sort them in a couple plastic lunch baggies, and you’ll find the base game and your favourite expansions can come with you in a much smaller box.  (Note: All games have been linked to their entry on BoardGameGeek.com so you can read more about them.)

END_OF_DOCUMENT_TOKEN_TO_BE_REPLACED

Age of Sigmar: Soul Wars is coming and The Sentry Box is now taking preorders for the boxed set, General’s handbook, Malign Sorcery boxed set and all the other items that will be released for the new version of Age of Sigmar on June 30th.
Come down to the store, or call and put in your pre-order now with no cash down. Earn double Vicinity points on all pre-orders. Don’t have a Vicinity account? Then set one up for free when you place your pre-order.

END_OF_DOCUMENT_TOKEN_TO_BE_REPLACED

After a two week vacation we are back bringing you the news stories from the Table Top and Board Gaming world that we found interesting.

END_OF_DOCUMENT_TOKEN_TO_BE_REPLACED

It seems that the world just keeps on turning, not content with a boat load of news from Fantasy Flight Games last week and them updating their flagship X-Wing game to a second edition, Games Workshop have come out swinging this week with lots of news coming out of Warhammer Fest 2018! END_OF_DOCUMENT_TOKEN_TO_BE_REPLACED