Time to the release of the new Indomitus box for Warhammer 40k is counting down. Staff painter Chris is painting up the Necron half of our display set – let’s see how it’s progressing: 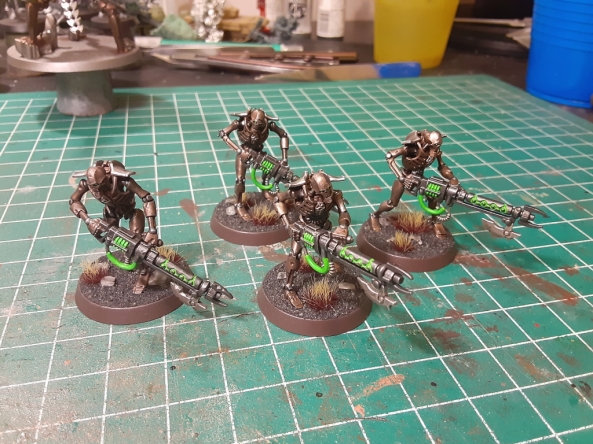 With the basics squared away, it wasn’t too much trouble to wrap up the rest of the first batch of Warriors.

Next on the list was the Skorpekh Lord and Royal Warden. I decided to work on them at the same time, since they both share the same bright accents that I elected to pick out in gold. At first I tried Retributor Armour, but I wasn’t quite happy with the result – it looked a bit too bright compared to the darker metal of the body. I tried again with Game Color Bright Bronze, which appears to be a much better match.

Rather than just go with straight Necrotite Green on the large glowing orbs on the Skorpekh Lord, I elected to add a couple highlights by adding progressively more Wraithbone to the green, finishing with a wash of Army Painter Green Tone.

The final touch for the Skorpekh Lord (which will also appear on most of the other character models) is the strange and otherworldly metal of the giant sword. I didn’t want to spend the time needed to paint the interlocking green gradient effect featured on the studio model (cool as it is) but I’ve also done some experimenting with Vallejo’s Shifter paints. They create a really neat shifting color effect – it’s kind of hard to photograph, but: 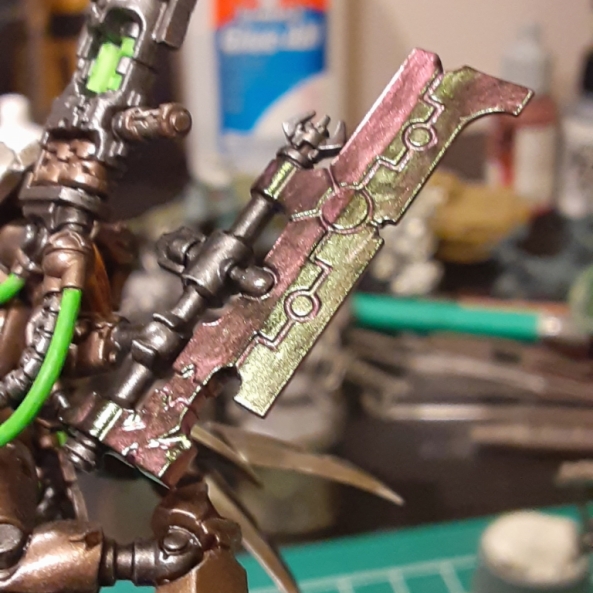 That sorts out the new areas in need of paint, so finishing off these two figures wasn’t too difficult. On to the creepy, spindly Canoptek Reanimator!

Oops, a bit too spindly. Be careful with these narrow claw-arms. This wasn’t too hard to patch up with a dab of superglue, but it’s certainly a weak spot. I wanted to set this model apart a bit, so I flipped around some of the colors and did the core of the Reanimator with Black Metal. There seemed to be a few too many green areas, so I settled on picking out some of the cables with P3 Coal Black instead. I think it blends well with the overall scheme.

Lastly, the detail on the bases received some Model Color Medium Grey for the ruins, Game Color Dark Flesh for rusted areas, and Mephiston Red on the ruined Mechanicus bits under the Reanimator.

The project is coming along nicely, but the time to the deadline is growing ever shorter. Next will be more Warriors and Scarabs. Lots left still to do!