Greg kicked off Monday Board Game Night with Glory to Rome, “Hadn’t played this in a while and was reminded of it recently so brought it to Monday night games. What was about to be a two player game, then turned into a three player, then four and then five as more people arrived and were interested. It’s one of the earlier games that uses cards in multiple ways, as roles, resources and buildings, depending on the situation. It’s a great game, albeit one that can have a blowout victory, as happened in this case, with Kevin crushing the rest of us mercilessly, with the scores being 45, 24, 12, 11 & 6.”

He then played Sorcerer City, “I got another chance to play this fantastic new tile-laying, deck-building, real-time game. I taught four new players and everyone seemed to enjoy it a lot, which seems to be par for the course with this game. The timer adds just the right amount of tension in the build phase in my opinion. In this game things started well but then I faded towards the end, having a very poor final round and ending up in a mediocre third place.” 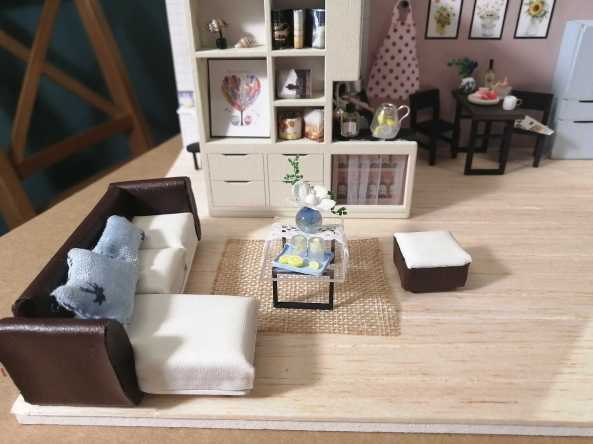 Danielle finished half the living room in her tiny house.

Greg and Tracy played Exit: The House of Riddles, “Tracy and I tried one of the Exit games (her first, but I’ve played a bunch of the others). This one had a difficulty rating of 2/5 and we did find it mostly fairly straightforward, only needing a few clues, and in fact the one riddle we got stuck on the most we had found the answer but then I started second guessing it and making things more complicated than they needed to be. We ended with a score of 8/10 and both enjoyed it a lot!”

After a 2 month hiatus Greg’s group were back playing Gloomhaven again. “This was a tough scenario that we only just made it through. The fact that half our team is more about support and disruption meant we struggled a bit with getting enough damage done. The cultists all summoned multiple living bones too, giving us even more problems. We just about managed to finish off the last monsters before the power of the evil altar overcame us!”

Greg and Renee played In the Hall of the Mountain King on Friday’s livestream. Greg, “This is another Kickstarter that arrived recently and is a tile laying resource management game. Players are members of troll clans who are reclaiming their homes in the mountain, digging tunnels, dedicating great halls and unearthing statues for the clans. It’s a game that starts slowly, with players not able to do too much early on, but then ramps up thanks to the cascading resource generation mechanism. As players recruit new trolls into their trollsmoot they add them into a pyramid shape of cards, and a recruited troll will generate resources for itself as well as all trolls underneath it in the pyramid. Players can earn points by digging tunnels, dedicating great halls, placing Pedestals and having statues in their tunnels. It was a fun game that plays 2 to 5, but I’d probably want to limit it to 4 as, even though some turns are very fast, others can take a bit of thought and forward planning. Looking forward to playing again.” Renee, “When we started the game I couldn’t wrap my head around how I was ever going to have enough resources to do anything, but between collecting resources on the board while digging tunnels and triggering chains of resources every time you hire a troll, it’s more about being clever about how to use the resources you have. There are a few different strategies to employ for end game points: building great halls, moving statues to the inner mountain and building pedestals. I enjoyed the puzzle of building tunnels to acquire resources and statues and the resource generation mechanic is a lot of fun too.”

Greg got Dominion back to the table, “First play in quite a while, and this was with the original base set using a random assortment. I always enjoy playing Dominion, it’s a game I’m happy to return to again and again. I did a bit of a mixture of getting big money and thinning my deck a little, and managed to squeak a win in a tight game.”

Greg also got a chance to play 7 Wonders again, “Another game I don’t play as often as I once did but always enjoy. This was a four player teaching game and ended up very close with two players tied for the win. Definitely a classic.” 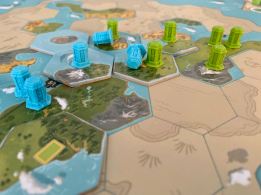 Renee and Jenn played Tapestry again, “We wanted to play this again so Jenn had a chance to replay it while it was still fresh from our learning game last week. Another fun game! I like that every time you play, you are forced to try different things to best take advantage of your civilization and tapestry cards. This time I finally made it to the end of a track for the first time and made it to space! Still feel like I have a lot to explore in this game.”

Greg played Game 4 of his Clank Legacy campaign, “we’ve unlocked even more of the map now, as well as [spoilers] and [spoilers]. It feels like each game is taking a long time, but that’s mostly because there’s so much to read and unlock during set up and game end. I’m thoroughly enjoying it though and look forward to the next game which will involve the [spoilers].”