Kris here with this weeks staff gaming blog while Renee enjoys some time off!

That change aside, let’s get right in to the usual swing of things with a fun Roll and Write game, this time played by Sue!

“We played Lanterns Dice. This is my new favorite Roll and Write game!

I was excited to try this beautiful game after the great reviews from Greg and Renee and we loved it! We watched a quick tutorial online before we played. This game was easy to learn, fun to play, and was a great length for this kind of game (not too long). We liked it so much that we played it a second time right away. Some of the mechanics reminded us a little of Azul, so if you like that game I would recommend this game too. I thought Lanterns Dice was great!”

Meanwhile, Gord managed to get some game time in as well, getting Thunder in the East on the table;

“Enough with the science fiction. It’s back to the Eastern Front with the first of the new game series by Frank Chadwick. The components and pieces in this, along with the charts and rules, the most beautiful I’ve ever seen. This is one well put together game. Looking forward to it a lot”

Next up we had a two for one effort from Sam and Jordan who played a game of Welcome To with Sam’s Mom.

“Jordan, my mom and I just played Welcome to Your Perfect Home! I almost led Mia Ville to victory but was a few points short. I thoroughly enjoyed playing this, and am excited to try the easter egg expansion next!”

Jordan added “Chili’s, the ultimate in the food industry and in neighborhood planning, achieved a landslide victory by 1 point”

Sue, on the other hand, took a leaf out of Gord’s book and tried something a little outside her usual wheelhouse. 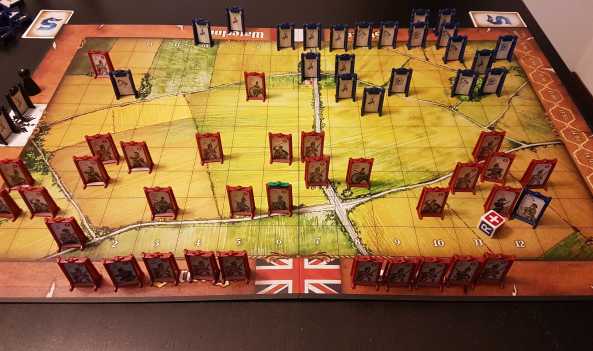 “I dipped my toe into the historical world this weekend and played Waterloo Stratego. I like that there are different levels of complexity in this game, it made it feel like the game came with expansions included.
Having never played before, we played the most basic and simple version of this game. We didn’t really have a strategy in mind since it was our first time playing, but it quickly became apparent how to effectively strategize. Even as beginners this game was fun and fairly easy to pick up. An interesting game dynamic is that the English start off as the weaker army, but after a certain number of turns the Prussians show up, and the tides turn and the French become the weaker army. So the French really have to strategize make the most of the time they have the advantage. Meanwhile, the English have to hold out until the Prussians arrive.
You don’t get to see the other army’s troops (just what kind of unit it is) until you attack, which can make for a fun surprise. Interestingly, my opponent came to attack with Napoleon, and he totally randomly guessed where my leader, the Duke of Wellington, was hidden. So it ended up being leader vs. leader and the battle of Waterloo ended up coming down to a single dice roll (unusual) and it could have gone either way. But in this case, the Dice Gods kept it historically accurate and the British prevailed again.
This game was really fun, fast-paced, and with involves options and strategy that offer lots of replayability. The French shall rise again…”

Not content with opening with a Roll and Write and then closing with some historically accurate Waterloo action, soo felt that this weeks blog had a distinct lack of Zombies!!! and was kind enough to rectify that for us. 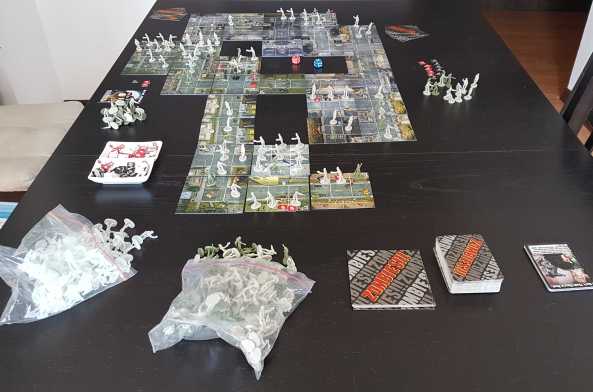 “We played Zombies!!! this weekend. This game is easy to play and fun. The goal of the game is to either escape to the helipad or kill 25 zombies. It’s kind of a light hack n slash. You can also get cards which will help you kill zombies and/or lightheartedly screw over your friends.
Like the D&D boardgames, you randomly flip over tiles and build the “board” as you go, so it’s never the same twice. Different tiles have different things going in, so between the tiles and the cards, there are lots of different things you can do which keeps it interesting.
This is a light game, which is great for 2 people or larger groups. It’s fun and never the same twice!

PS – I actually received Zombies!!! as a gift from my sister. She came into the Sentry Box and asked for a game with miniatures, and one of the fine Sentry Box staff members recommended this game. It was a great recommendation!”

Thanks for reading everyone and make sure to let us know what games you have been playing this week in the comments!