We kick off this week’s staff blog with some painting from Chris for Kill Team and Tanks: Modern Age.

“Finished some small terrain pieces for 40k/Kill Team. The ruins are almost entirely done with drybrushing so I don’t have to use buckets of wash to darken the recesses. Starting from black primer, my drybrush steps went Mournfang Brown, VGC Cold Grey, VMC Light Grey and finally Tyrant Skull. Only the metallic details got a quick Strong Tone wash after picking them out. The crates are just Vallejo Khaki drybrushed with VGC Dead Flesh, with the eagle symbol in Leadbelcher before an overall Strong Tone wash. Lastly, everything got a coat of Vallejo Matt Varnish spray to protect the finish during games.” 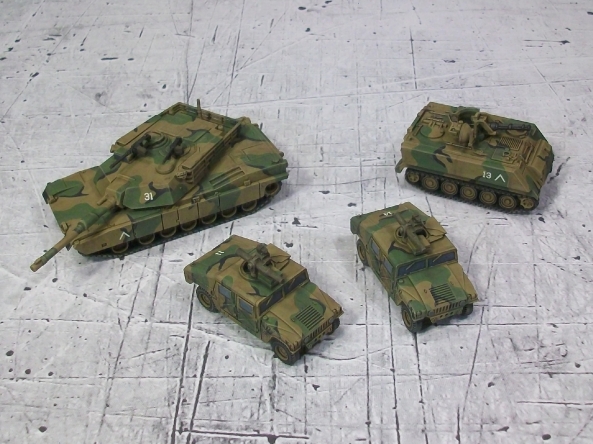 “My collection of American armour for Tanks: Modern Age keeps growing. I’ve now finished both of my Humvees, plus an M163 VADS and an M1A1 Abrams tank. For games like this I like to use non-historic but vaguely plausible camo schemes – this one is inspired by Japanese patterns (although I believe the dark lines only appeared on their helicopters in reality). I’m imagining that in this what-if WWIII universe the US also found itself in conflict with China around the Pacific, and adapted colors similar to the JGSDF. I started with a base of VMC Khaki (conveniently available in a spray can!) and then added stripes with Vallejo Panzer Aces Splinter Strips. The small stripes are VMC German Grey, along with all the tracks and tires. Lenses and windows were picked out with VMC Field Blue. Everything got a Army Painter Strong Tone wash (thinned with water and Lamian Medium) and finally a Zandri Dust drybrush to add dust and bring out the edges. Next up, I’m working on a pair of Cobra helicopters.”

Greg and Renee kicked off Monday Board Game Night with 23. Greg, “A simple little card game where players are trying to get rid of their cards. The player with the 1 starts and then after that in clockwise order players play a card or cards that are equal to or higher than the last played card(s). If you play more than one digit higher you have to take penalty tokens, unless you play one of your three bonus tokens that allows you to play up to five higher or lower than the last played card. Players can pass by taking one penalty token, pass and force the next player to play by taking two penalty tokens, or drop out completely and take a penalty token for each card in hand. Play two rounds and add your scores, with the lowest score winning.” Renee, “This game was interesting, it reminded me a bit of No Thanks, but that might have just been the chips. Discarding 3 cards at the start was a hard decision, because its not at all obvious what cards will be the best to have in your hand. Another fun game with lots of player interaction that I’m really enjoying playing as a way to kick off Mondays.” 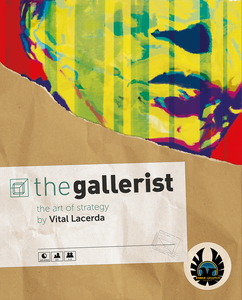 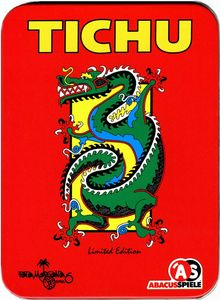 Greg then played The Gallerist, “I taught this to three new players so it was very much a learning game. As the experienced player (having played twice) I did a great job of not doing very well. Four players definitely felt different to two and the game seemed to end way too soon for me to get my plan going.” Followed by a game of  Tichu, “This started very evenly, with scores tied at 500-500 at one point, but then a Grand 1-2 put Jeff and Nathaniel close to victory and they closed it out with another successful Tichu call from Nathaniel.” 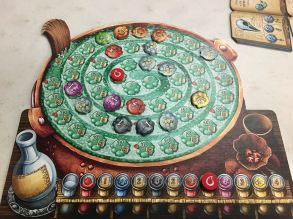 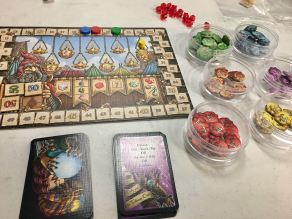 Meanwhile, Renee had an opportunity to play The Quacks of Quedlinburg, “I played this game so much when it first came out, but as it turns out, hadn’t played it since Feb. So when Setareh brought it, I happily played a game. We played with the alternate player board, my first time, and I liked it. We played with yet another new combination of ingredients which is why I find this game so fun. Each time you play it’s a slightly different strategy and the push your luck aspect is always a riot. The game ended with the scores really close. Setareh edged out a win thanks to my pot exploding for the first time on the last round.” 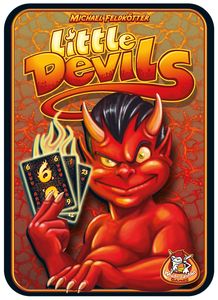 She then played a couple card games, starting with Sluff Off! “This is a a trick taking game that was new to me and I loved it! There are cards numbered 1-15 in 5 colours, with blue always trump. Before the round begins, players take turns taking chips for the tricks they think they will win, getting to discard them when they win a trick with the corresponding colour. However, if you win a trick that you don’t have a chip for, you take a penalty chips. You can also decide to take the chicken instead and then your entire game is about making others take tricks they don’t want. This was a really fun variation of wizard and I would happily play this again. Setareh and I convinced our group to try Little Devils after we had so much fun playing it a few weeks ago. It was once again a lot of fun and I’m looking forward to taking this on the family vacation next week. 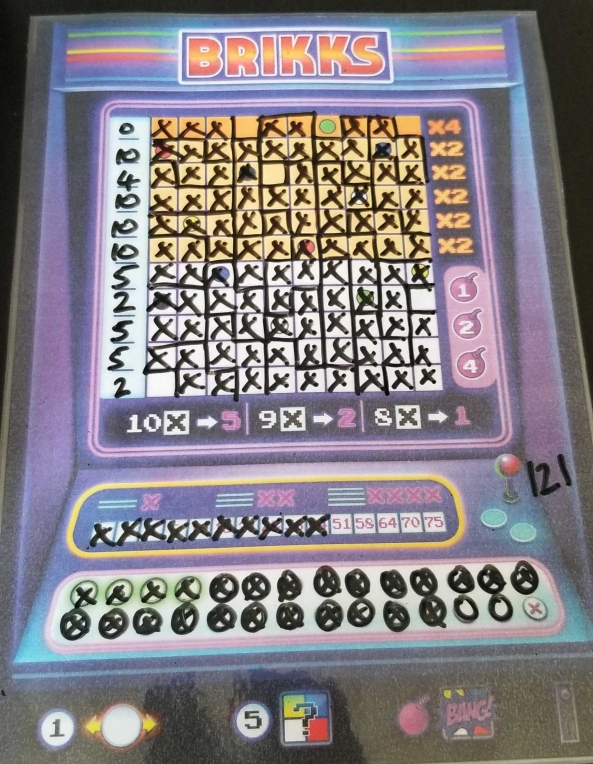 Now for Greg’s weekly roll and write update starting with Brikks. “Still playing difficulty level 2 but had a pretty good game, scoring 121 points and almost maxing out the energy bar. The luck of the dice definitely can play a big part in this game, but there is also skill involved in knowing the odds and choosing when to spend your energy.”

And now the update we’ve all be waiting for on Ganz Schön Clever. “It’s over. Finished. Done. The task is complete. Still room for improvement but I can finally breathe a sigh of relief.” 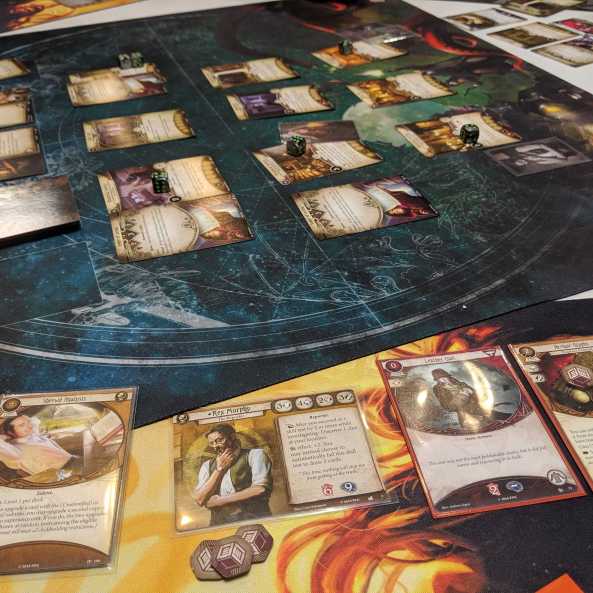 Kris continued his Arkham Horror: The Card Game meet up, “We played the 3rd instalment of The Path to Carcosa. I am playing Rex Murphy still and seem to have formed a habit of starting off wasting turns with some unfortunate draws from the Chaos Bag but then finish strong. Still really enjoying the game in general and this set seems to have lots of interesting elements to it with lots of decisions coming back to haunt you.”

Greg, Renee, Setareh and Jeff played Reykholt on Friday’s livestream. Greg, “An Uwe Rosenberg worker-placement game, but one where you’re not trying to score the most points. Instead, players are fulfilling orders for specific types and quantities of vegetables in order to advance on the tourism track, with the winner being the person who advances the furthest. It still has the usual interesting decisions of what actions to take, what to do when someone blocks you, plus the bonus advancement once per round on the tourism track adds another layer to think about when planning. The service cards add some variability in a very Uwe way. The artwork and components are top notch too.” Renee, “I’d been curious about this game for a while now. In many ways it’s a classic Use worker placement involving growing vegetables, but the number and order of acquiring the veggies central strategy as the only way to advance along the scoring track is to provide the required vegetables. It’s an interesting mechanic and I enjoyed the puzzle of figuring it out. The board has lots of different action combinations so as spots are taken its fun to figure out the best alternative action. The fact that each round you get bonus veggies of one type also allows for some interesting choices.”

At Staff Game Night a few of us played a game of Welcome To… Renee, “It had been awhile so it was fun to rediscover this again. Now that the expansions have all come out, I’m looking forward to trying the new variations. Greg made a point of making sure we all knew how bad he is at this game and then proceeded to win quite handily.” 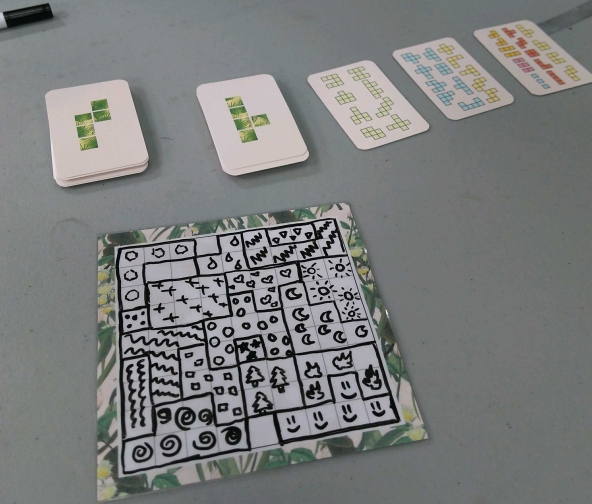 We followed it with a game of Second Chance, Renee, “Another game at staff game night. It was my second chance to play it and I enjoyed it as much this time. Just a fun, puzzily game.” The picture above is Danielle’s winning board in what ended up being a very tight game. For reasons Greg wants everyone know know that he came in last.

Sam, Danielle and Renee ended Staff Game Night with a play of Ex Libris. Renee, “This is a gorgeous worker placement game in which you are placing your cards in your worker area to create your book collection. Each player gets a special power activated whenever they use their main character as well as 2 assistants. Each round, 4 new action spaces are dealt out to use for the round, with one added to the permanent action spaces at the end of the round. The actions involve acquiring new cards, exchanging cards and shelving cards, the key is using them effectively to create the best book collection. In addition to building your collection alphabetically, you want it to be balanced with all the books types represented and in each game one book type grants extra points, another is designated as banned and results in negative points and each player gets a focus book type worth bonus points. This was a fun mid-light worker placement game. And it looks great on the table.”