Uncle Mike is back again with the fourth part of his review for Warlord Games’ Strontium Dog, this time he looks into the universe building for the game.

One of the most rewarding aspects of a gaming hobby is the ability to roam around in a world of your own creation. While this is true for role-playing games, I find it doubly true with miniature games. The creation of specific scenic elements for your gaming table is both personally rewarding and adds a great deal to the narrative.

The Strontium Dog miniature game will allow me to use most of the general sci-fi scenery that I have amassed over my nerding life, but I tend to build a few pieces for each new game I get into. I feel very strongly that my games should be set on some sort of specific world. The stories always featured scummy and derelict planets where the outlaws were hiding out and I want that feel on the tabletop. And so, the idea of  ‘Unc’s World’ was born… 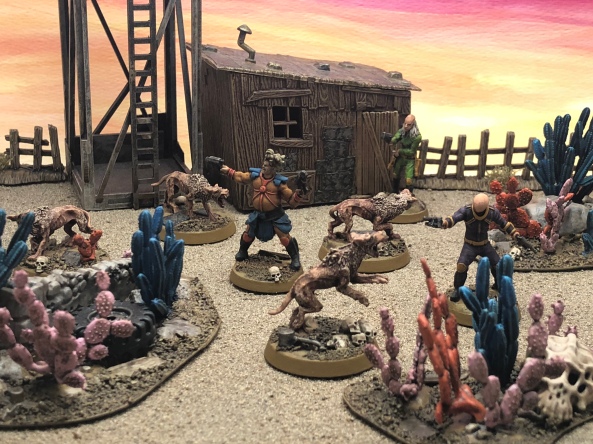 Keen to emulate the spaghetti westerns that I’ve been watching non-stop and burdened by a childhood of playing the second edition of Warhammer 40K, it should come as no surprise that the first things I would need would be cactus and skull piles. Things couldn’t be easier thanks to Pegasus Hobbies Cactus #1 kit and Games Workshop Box of Skulls. I have all the lonesome, foreboding and arid scatter terrain I need.

Every good miniature nerd needs a bits box, a place to store away unused parts, unusual finds or models with no particular purpose. If you are old, like I am, you just might have several bits boxes…or more correctly, several rooms, serving as bits boxes.  Every new project requires a dig through in contemplation of scale, feel and general relevance. I came away with these Apex Predators, Ral Partha metals from 1986, which I feel scale quite nicely with the Strontium Dog model line.

Conveniently, the activation system should easily allow me to simply put an extra chip of a different colour into the bag and voila, my ‘Lyenas*’ will be on the prowl, in game, in no time. I’ll use the customizable character creation rules from the book to build their game profiles. Rather than either side using them, they will be a feature of games on Unc’s World, adding a bit of tension and excitement to the continuing narrative. 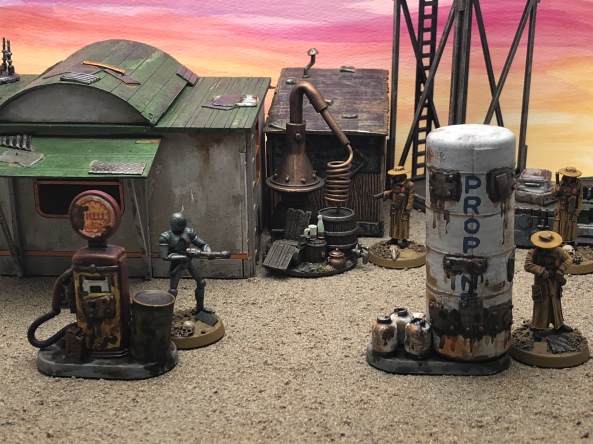 Having a gaming group, or even just another person to share the preparation work with is an aspect of the miniature hobby that I enjoy. I always love seeing other peoples ideas and creations and interacting with them on a tabletop. For this project, my long-time gaming partner hasn’t disappointed by coming up with some rather fancy pieces of scatter terrain. While these pieces will function as simple and characterful line-of-sight blockers it is also handy that they can all be considered ‘explodable’, which will liven up those gunfights for sure!

The moonshine still supplies another part of the narrative, combined with the cactus it provides a reason for scumbags to be on the planet. Some sort of illegal alcohol production scheme.** The gas pump and propane station add to the eclectic nature of the backwater planet’s look, and make sure we have plenty of places to refuel, should there be any mounted model action in the near future. 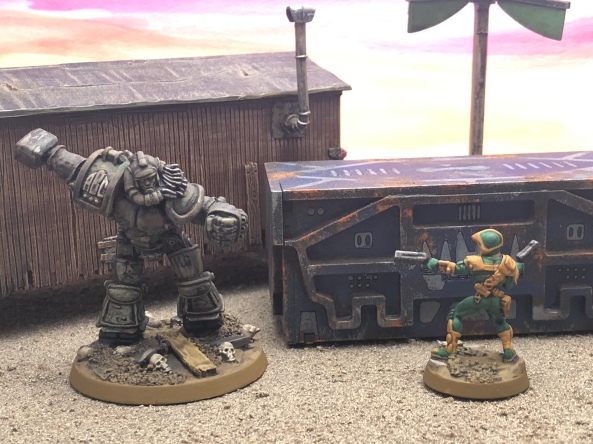 Lastly, when digging around in my frenzy, I came across this old Foundry Hammerstein, who had always seemed a bit out of place and thus was never finished. He scales wonderfully with these figures and while I don’t think such a crossover ever occurred in the progs, it may well happen on my gaming table. Now everything is sorted and the games can begin. These few pieces of scenery and assorted extra models will liven up the next game…which starts in a couple hours. No doubt there will be sporadic updates and projects and possibly even more articles. Thanks for reading and get playing!

*I think I’m being pretty smart here, combining ‘Lion’ and ‘Hyena’…although someone must have thought of this before, I can’t think of who…possibly Napoleon Dynamite…regardless, I smile and claim ownership of this idea. Also, Strontium Dog is totally the universe where folks would get chased down by large, slobbery fauna. Who could forget Impetigo Jones being torn into tiny bits by those crabby things in the comics, there is even a card which references this very moment.

**When I was a kid I read a lot of Frank Herbert books. One book, the title of which I’ve forgotten and am too lazy to re-look up, had sentient kelp that communicated by bio-luminescing. Tweaking that a bit, it seems obvious that this sentence gives the cacti of Unc’s World the psychotropic effects much sought after on the illegal, trans-world, booze market. A suitably 2000ADish idea.