We start the week with Sam playing the new Lord of the Rings: Journeys in Middle Earth, “This game plays a lot like Mansions of Madness with the integrated app, but has the urgency of the Lord of the Rings living card game. Enemies have armour which is a nice touch, and the cooperative theme makes for a fun and challenging evening. Each player picks a hero and a class. I played as Legolas who was a hunter. I highly recommend this game to anyone who loved Mansions of Madness or loves the Lord of the Rings theme in games!”

Greg (surprise!) played Ganz Schön Clever, “Another score over 300 on the second challenge. Definitely think yellow is a trap on this one.”

Kris played more Arkham Horror LCG, “We are coming to the end of this Chapter with the 5th out of 6 scenarios. Our brave (read foolish) investigators search the woods around Dunwich and make their way up the Hill, Where Doom Awaits. With lots of divergent paths slowing down the progress while they fight off monsters and investigate ever stranger locations I steered Jenny through the perils surrounding Dunwich before we defeated the evil wizard and jumped through the portal with the last action of the turn before the threats from beyond the vail would have closed there grasp upon her.” 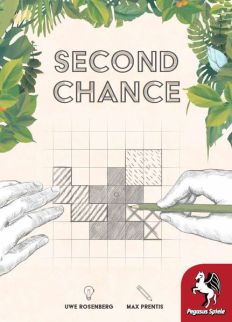 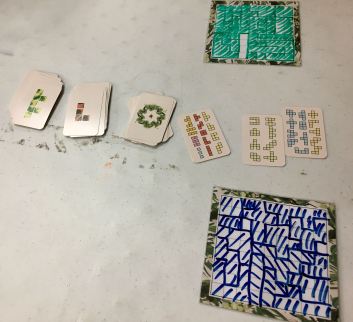 Greg and Renee played a bunch of games on Monday Board Game Night starting with  Second Chance. Greg, “Got a second chance to play this (ho ho) and did a little bit better. A fun filler.” Renee, “A flip and write game along the lines of Patchwork, in which you try to fill up your board as efficiently as possible. The name comes from a mechanic which allows you a second chance if you can’t use one of the two shapes. Takes some planning and a little luck, something I experienced a couple times when the perfect shape came up for my board. I managed to win with only 2 open squares on my final board.” 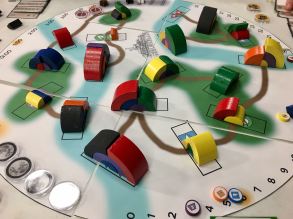 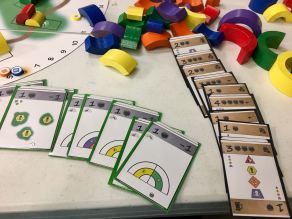 LepreContractors. Greg, “This is an upcoming game from local designer Adam Wyse. Players are building rainbow pieces trying to fulfill contracts to score points, or accept bribes to try to make certain companies get ahead of others. This was only a prototype but I can imagine that the final game will look fantastic and it was a lot of fun to play.” Renee, “I had a lot of fun trying out this prototype from Adam, a game he designed around the wooden playing pieces used to build the rainbows. There are some interesting mechanics in play here; you are building rainbows to fulfill your work orders, but in so doing you impact the value of each of the colours. Lots of points to be made by manipulating the colour market to complete bribes, and this is where the game gets interesting, with all the players trying to affect the market. I’m looking forward to seeing the final version of the game.” 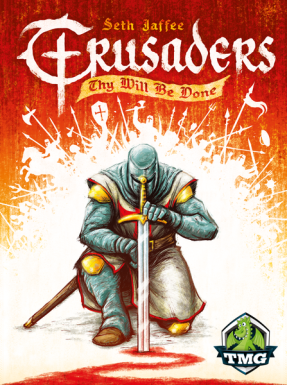 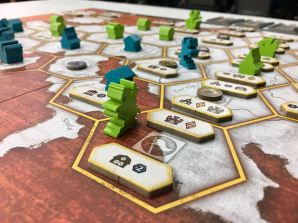 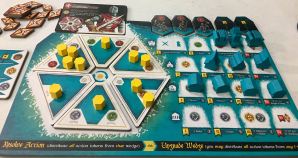 Crusaders: Thy Will be Done. Greg, “Renee and I played a 2 player game and I tried to go for a crusading strategy, which worked out well. Really like this game!” Renee, “I really enjoyed this when we played it on the livestream, so was happy to play it again. I tried to focus on a strategy but completely failed to execute it effectively. I do enjoy the challenge to the rondel and despite the frustration of not having the pieces where you need them, enjoy the process of making it work for you. I clearly need to play this more.” 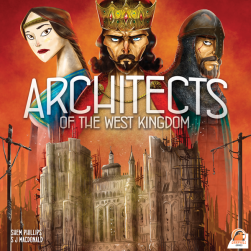 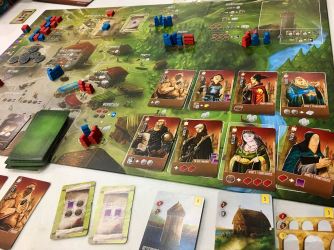 Architects of the West Kingdom, Greg, “Renee and I moved onto a two player of this great game. It’s not quite as tight with two players as there are less workers to lock up but I still enjoyed it. I focused on building the cathedral and it paid off.” Renee, “Another game we’ve played on the stream, and part of a series I’ve really been enjoying. The worker placement mechanic of a space getting more powerful the more you use it, seems to lend itself to engine building, but the game forces you to diversify and then you find your workers spread out more than you’d like. Running out of workers is an interesting twist to the game and I definitely needed to plan better for that as it happened twice to me. Another game I enjoyed getting to play again.” 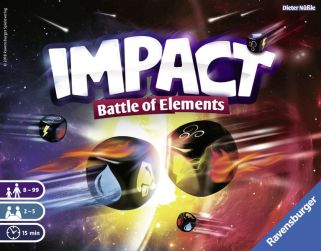 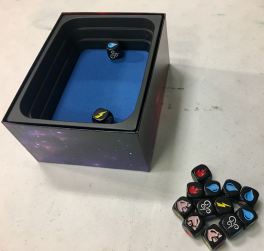 Impact: Battle of Elements. Greg, “This is a dice combat game of sorts. Players throw dice into the arena hoping to get matches with other dice. The last player with any dice left is the winner. Renee kicked my ass.” Renee, “This was a quick somewhat silly dice game where you roll and add a dice to the pool in the arena and collect matching dice. You try to hit the dice when you add your die so they all roll to increase the chances of matches, a strategy that seemed to work better for me than for Greg. But I like to think that because I like dice games, dice games like me.” 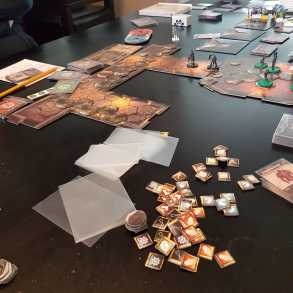 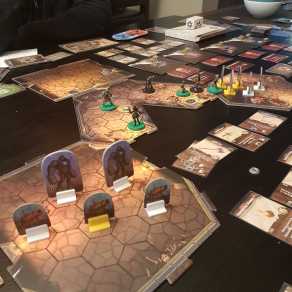 An update from Greg L on his group’s Gloomhaven campaign, “Our first loss in Gloomhaven as we chose poorly and our Mindthief ran out of cards. Extremely challenging scenario as all of us had to survive to activate the pressure plates that completed the mission.” 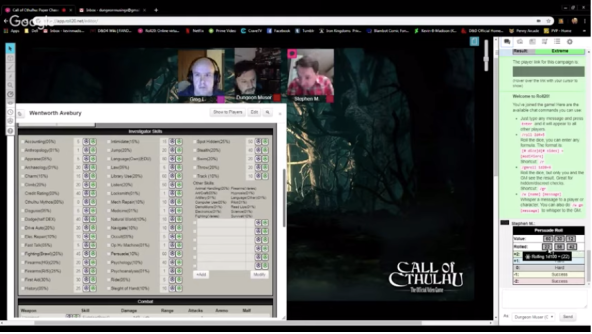 Greg L played Call of Cthulhu RPG on Kevin’s Youtube channel, “1v1 Call of Cthulhu including character creation. With most of Warhammer Fantasy rpg group off at Avengers premiere we had to make alternate plans. Kevin and I play one of the intro scenarios from the CoC starter box. One of the players from our 5e group joined us half way through. It was our first try at 7th Edition ruleset. Much fun was had by all!” 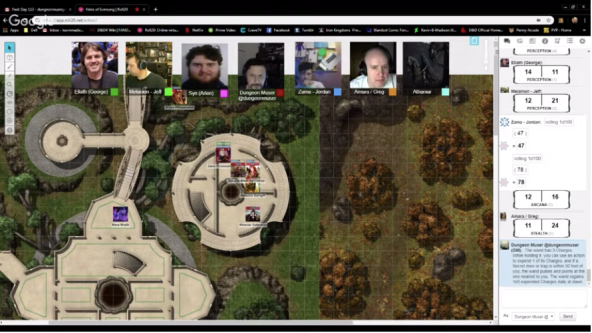 They also played World of Warcraft RPG “Episode 5 of our 5e game using the World of Warcraft ruleset from DM’s Guild. We had a full slate of players for a change and rampaged through the abandoned estate of a noble family in search of a missing magister.”

The other Greg played Knapp Daneben, “Another German Roll & Write dice game where you are trying to place numbers in a grid so that adjacent numbers are one higher or one lower. You also score points for placing numbers that are at the ends of the bell curve. I scored a pretty respectable 71.” 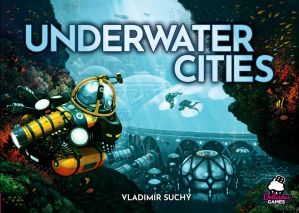 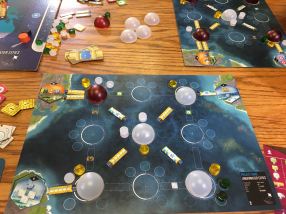 Renee, Greg, Nick and Jeff played Underwater Cities on Friday’s livestream. Renee, “This is a great game combining worker placement, hand management and a bit of engine building. I ended up with a lot of action and ability cards which seemed good, in that it game me some extra actions and bonuses, but it came at the expense of immediate goods which made it harder to get the things required to build my cities and buildings. This is a longer game, made longer when it is harder to figure out what to do get what you need, but I found the game very engaging and the time flew by. Definitely recommend checking this game out if you have a chance.” 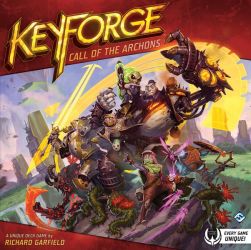 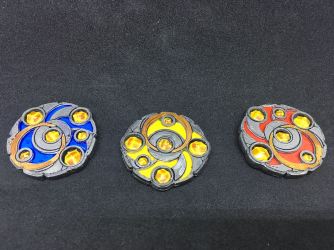 Kris played some KeyForge in our Sealed event on Saturday. “I love Sealed KeyForge, just opening your deck and having to learn it as you go. Figuring out all of its synergies and how it works is really good fun. I also finished a test set of Keys to use with my new Acrylic Tokens.” 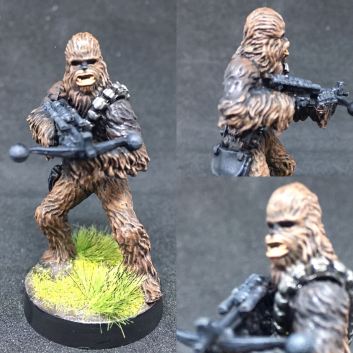 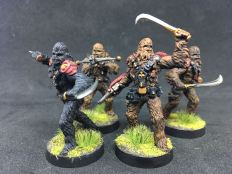 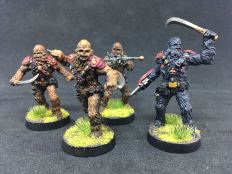 We finish the week with a painting commission Kris did for Star Wars Legion;
The Mighty Chewbacca and some Wookie Warriors. “For the Wookie Warriors I wanted to make sure I had a slight variation in the colour of the fur, so after undercoating them all Black, I split them in to two groups, did a base coat of Brown on one lot and then painted them in batches two at a time, this let me use slightly different washes to get different tones but didn’t take too long. Chewbacca was a little more involved as I wanted to capture the twin tones of his pelt so did some angled dry brushing techniques to make sure the transition was not too stark and looked natural.”