In this addition we have a look at an upcoming expansion for Runewars, a new expansion for the Arkham Horror Card Game, a 10th anniversary edition of Stone Age, a new addition to the Pandemic family and some new games. 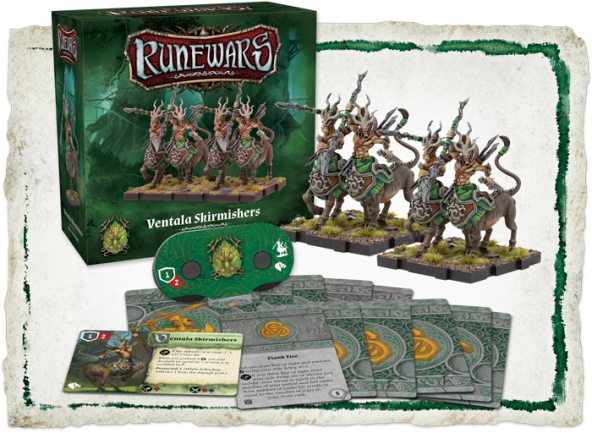 The woods of the Aymhelin are deep, ranging even wider than maps would suggest, and there are beings within far older than humanity itself. All fiercely guard the forests from outside intrusion, and now, as the threat to the great forest grows, more of its denizens fight alongside the Latari to preserve their homes. Among these, the hooved nomadic hunters known as the Ventala are unyielding warriors in battle, using their short-range javelins and razor-sharp knives to strike down the enemies of the Aymhelin and defend their land.

No word yet on when this is expected in stores.

Fantasy Flight Games is happy to announce Return to the Dunwich Legacy, an upgrade expansion for The Dunwich Lagacy campaign from Arkham Horror: The Card Game:

In The Dunwich Legacy, you experienced your first full-length campaign for Arkham Horror: The Card Game, delving into eldritch mysteries while facing unknowable evil over the course of eight distinct scenarios. Now, Return to the Dunwich Legacyi nvites you to re-open your old cases and experience this thrilling campaign with fresh eyes as you encounter new challenges and new surprises. Across this expansion’s 104 new cards, you’ll explore new locations, face more ghastly treacheries, and enhance your investigator’s abilities as you face even more unspeakable terrors. What’s more, continuing in the footsteps of the Return to the Night of the Zealot upgrade expansion, Return to the Dunwich Legacy also features a premium box and thirty-two divider cards to conveniently store your complete campaign in one place.

Return to the Dunwich Legacy is expected sometime in Q4 of 2018. Call into the store today to pre-order.

Fantasy Flight Games is proud to announce Altered Fates, a new DLC scenario for Mansions of Madness—now available as an in-app purchase on the App Store, Google Play, Amazon, and Steam:

As the curtain rises on Altered Fates, you have been called across the pond for a special investigation in the English countryside. You have been tasked with protecting the peculiar family heirloom of a prestigious family, but when you arrive, you find the heirloom has already fallen into the wrong hands. While the exact purpose of the item is unclear, whatever strange machinations the thieves have intended are already underway, and your team of investigators are soon separated.

Through some unnatural work, you have not been divided by space. Rather, you have been cast out of time, with some investigators left behind in the present… while others are trapped in what appears to be the future. Is this the work of the thieves, or is the impossible occurrence linked to the artifact itself? How can your team continue the investigation when you are divided by the span of ages? And most importantly, how do you find your way back home?

Altered Fates challenges investigators like never before by dividing the team across two maps that are in play simultaneously. The first is a proper 1920s mansion, like those you have come across in previous investigations. The second, however, is the future of this home— now an abandoned, boarded-up building. Each map presents its own series of challenges, with the investigators in the present directly affecting the investigation of their companions in the future: an item tucked beneath a loose floorboard may be found later in the same hiding place, or a rescued captive may be able to return to the mansion in the future.

Meanwhile, the investigators in the future must contend with the consequences left to them by their friends in the past. Failing to save a captive may cause their vengeful spirit to haunt the house, tormenting the investigators instead of aiding them. And beyond the terrors locked behind every door, something darker lurks on the edge of your consciousness, a truth you cannot bear to face. The house is scarred by some unspeakable horror that happened long ago, and you can only guess at the fate of those you left behind. Your only hope is that those who opened the portal may have left something, some clue to how to return and warn your friends! The cost to your own life or sanity means nothing—there must be a way to keep this from coming to pass.

This lighthearted and fun game, designed by Jonathan Ying (Power Rangers: Heroes of the Grid) and illustrated by Victoria Ying, has already gotten a lot of positive attention, including the prestigious “Shut Up & Sit Down Recommends” Badge!

Bargain Quest is a game of adventure and capitalism for 2-6 players. You and your friends will take on the role of shopkeepers in an RPG town plagued by monsters. You must draft item cards to stock your shelves and arrange your displays to attract the wealthiest heroes to your shop.

After that, the heroes will face off against monstrous threats. If they succeed, fantastic! If they get eaten alive, well, at least nobody will ask for a refund.

In Slap It!, players race to be the first to slap the correct monster, but that’s not always as easy as it seems. With new monsters coming out of the portal, and the dice changing the rules, you’ll need to stay on your toes and be lightning fast. And if you see a monster coming… Slap It!

This game is expected in January 2019.

Citizens, soldiers, and allies of the Roman Empire unite in Pandemic: Fall of Rome! Raise armies, defend your cities, and forge alliances to ward off relentless barbarian incursions. Can you hold the line against the invading horde and prevent the fall of Rome?

Pandemic: Fall of Rome follows the proud tradition of the award-winning Pandemic, transforming the signature cooperative crisis management gameplay from disease control to the defense of one of the greatest civilizations in history! Instead of diseases, players face off against the migration of aggressive barbarian tribes. They must defend their cities long enough to forge alliances with the invading hordes, and in doing so save the Empire from certain doom.

Pandemic: Fall of Rome also features a unique play mode for the solo gamer as well as an additional challenge for the seasoned group. Solo players will take on the burden of being the Emperor and command three different roles to try and protect the city from the invading hordes. Players who want to tackle a more difficult game can try the Roma Caput Mundi Challenge by adding more Revolt cards to the deck. They must also respect the law in Rome that Roman legions are not allowed in the city.

Pandemic: Fall of Rome is expected some during Q4. 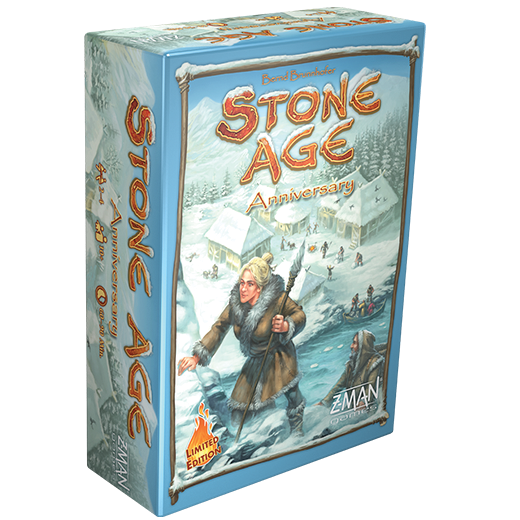 Also from Z-Man games comes the announcement of the tenth anniversary edition of Stone Age:

At the dawn of civilization, our early ancestors faced a constant battle for survival. Over time, they discovered new tools and techniques to improve their lives and the lives of their descendants. For ten years, fans of Stone Age have taken on the role of a human in this bygone era. Beginning with archaic tools, workers have been carefully sent out to collect wood, stone, and gold to attain higher levels of knowledge, build sturdier structures, and create a solid foundation of human civilization. Working under the bright, warm sun of summer, the tribe has grown and thrived.

Now the winter wind has blown in and the biting cold spreads. A dusting of crisp, white snow covers the ground. The kids marvel at the snow, sliding on the slick surface and throwing snowballs at each other. Winter is not all fun and games though. Wild animals stalk the edge of the camp, waiting for their opportunity. The snow continues to fall and temperatures continue to drop. The tribe must quickly work to gather resources, insulating buildings for warmth and storing food to avoid starvation, in order to survive the long winter.